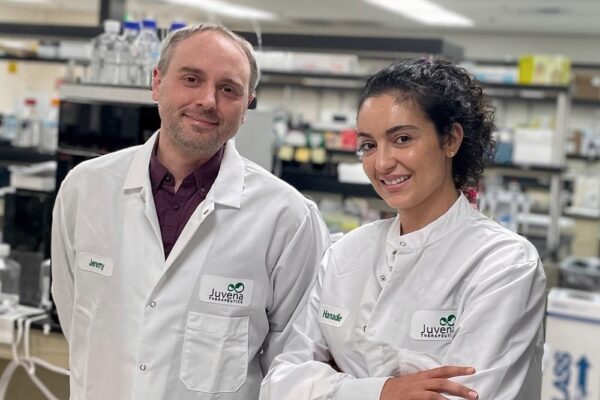 Many drugs work by targeting proteins. Biologic medicines showed that proteins can be made into therapies too—in some cases using proteins from the body. Juvena Therapeutics works with a type of protein from the body that can spark regenerative effects. Now the startup has $41 million to advance its pipeline, including a lead program in development for a rare muscular disorder.

The Series A financing announced Tuesday was co-led by Mubadala Capital and Horizons Ventures.

Juvena is working with secreted proteins, a class of proteins produced by cells. Released into the blood or local tissue microenvironment, these proteins have druglike properties, inducing all sorts of biochemical reactions. Hanadie Yousef, co-founder and CEO of Redwood City, California-based Juvena, said that the properties her company is interested in are tissue regeneration and repair. For Yousef, the work is personal. Her late father developed age-related chronic disease in his 40s that continued into his last three decades of life, she said. After witnessing her father’s declining health, she found her passion in building a company.

“What inspired me to start Juvena was knowing there are therapies that enable us to age in a healthy manner and really target these chronic degenerative diseases to rejuvenate lives,” Yousef said.

Secreted proteins already have a place in medicine and some them have become blockbuster products. Insulin is a secreted protein. Amgen anemia drug Epogen is based on a secreted glycoprotein hormone called erythropoietin. Even though secreted proteins have natural druglike properties, the pharmaceutical industry has not been able to harness their full therapeutic potential, Youseff said. These proteins are low in abundance, which makes it difficult for scientists to purify and characterize them. Secreted proteins are also structurally complex. Consequently, there’s a lot about secreted proteins that remains unknown.

Juvena aims to fill in the knowledge gaps with a first focus on secreted regenerative proteins produced by stem cells. The company’s technology maps these proteins and links them to the cells and parts of the body where they have a disease-reversing effect. This map shows the receptors that secreted proteins bind to, pointing the way for scientists to develop novel drugs. The Juvena drugs themselves are both engineered secreted proteins as well as biologics designed to modulate these proteins by targeting certain receptors.

Yousef’s research has focused on the biology of aging and the mechanisms underlying degeneration. She started this work at the University of California at Berkeley, where she earned her Ph.D., and continued at Stanford University, where she was a postdoctoral researcher. Studying the regenerative potential of secreted proteins planted a seed in her mind that this research could be translated into regenerative therapies for a variety of diseases, she said.

While Yousef brought secreted protein expertise, she needed someone with more technology savvy. She found that in Jeremy O’Connell, Juvena’s co-founder and chief scientific officer. O’Connell background is in proteomics and systems biology. Following post-doc work at Harvard, O’Connell did research at Stanford, where he and Yousef met. They formed Juvena in 2017.

“We’re not trying to edit the mutation, we’re trying to supply the signals that our body needs to promote regeneration and repair,” she said.

Juvena’s therapies will be chronic therapies. But Yousef added that Juvena will borrow from engineering techniques that advanced diabetes drugs beyond daily dosing with products that can now be dosed weekly, biweekly, or even monthly.

The DM1 program is currently funded mainly by $4 million from the California Institute of Regenerative Medicine and the National Institutes of Health. Yousef said this therapy could be ready for an investigational new drug application in early-to-mid 2024. The new financing would be used to advance that program to Phase 1/2 testing. The capital will also be applied toward the mapping secreted proteins in multiple therapeutic areas, linking them to more disorders in which they could bring disease-reversing effects.

Yousef said she has had some discussions with larger companies that could be potential partners to the company, either leveraging the company’s technology for their own drug research or partnering on one of the biotech’s programs. In addition to DM1, Juvena has preclinical programs in Duchenne muscular dystrophy and atrophy. The startup’s discovery-stage research includes programs in osteoarthritis and cardio-metabolic disorders. Yousef said Juvena aims to advance two to three additional candidates into preclinical development.