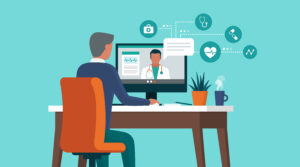 About half, or 48%, of Americans have heard of virtual primary care and 32% have actually used it, a new survey showed. But of those who have used it, 79% said it has allowed them to “take charge of their health.”

The report was released Monday by insurer Elevance Health and was commissioned by The Harris Poll. Conducted in March, it includes responses from 5,009 adults.

As digital health gains popularity, the survey provides payers and other healthcare stakeholders with key information on consumers’ preferences when it comes to virtual primary care.

“Consumers are using digital technologies at an accelerating pace, and consistent with this, we’re seeing at Elevance Health use of telehealth that is nearly 20 times greater than pre-pandemic levels,” said Rajeev Ronanki, president of digital platforms at Elevance Health, in a news release. “Virtual primary care gives individuals the opportunity to work with innovative services that make healthcare more convenient, accessible, and fit into their increasingly busy schedules. The study’s findings reiterate the desires of consumers to use digital technology — along with using traditional in-person care options — to take control of their health.”

The main reason consumers like virtual primary care is its convenience, the survey found. About 35% of respondents said they enjoy it because it allows them to talk with a physician no matter their location. Another 31% said they like the 24/7 availability of virtual care, and 30% said it’s easy to use.

Despite the high satisfaction with virtual primary care, there is still uncertainty, Elevance said. About three in 10 who have used virtual primary care said they think they need to see a physician in person to know what’s wrong with their health. Another 21% said they’re not sure if virtual primary care is covered by insurance, and therefore think it may be more expensive. Elevance, however, includes it as a benefit in its health plans, the report said.

“As we develop the future of consumer-centered healthcare, it is important that we create a digital care network that gives individuals access to a spectrum of connected services, which includes virtual primary care as well as in-office, in-home, and digital services,” Ronanki said.