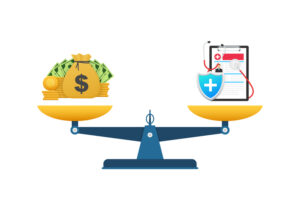 Despite record-high numbers of insured Americans, about 43% don’t have adequate coverage, a new report found.

The Commonwealth Fund Biennial Health Insurance Survey, published Thursday, included telephone and online interviews with a sample size of 8,022 adults. It was conducted from March 28 through July 4.

Of people who were found inadequately insured, 9% were uninsured, 11% had a period without coverage over the past year and 23% had insurance all year but were underinsured.

The issue was especially prevalent for those who purchased coverage through the individual market and marketplaces, with 44% underinsured. Among those with employer coverage, 29% were underinsured.

Being inadequately insured is causing financial issues for many Americans, with 46% of respondents stating they skipped or delayed care because of the cost. Another 42% said they experienced issues paying medical bills or were paying off medical debt. About half said they wouldn’t be able to afford an unexpected medical bill of $1,000 within 30 days. The problem is worse when broken down by race, with 69% of Black adults saying they wouldn’t be able to pay and 63% of Hispanic adults, compared to 42% of White adults.

Healthcare costs are a concern regardless of political party affiliation for Americans, but especially for Democrats: 68% said President Biden and Congress should act in the next year. This compares to 55% of Independents and 46% of Republicans. However, they were more split on health insurance, with 71% of Democrats saying ensuring everyone has coverage should be a priority for the government, compared to 51% of independents and 35% of Republicans.

“When asked about their top health care policy priorities for the president and Congress, survey respondents were divided along partisan lines,” the report said. “The closest Democrats, Republicans, and Independents came to agreement was on the need to lower the cost of health care.”

To combat the issues laid out in the report, the Commonwealth Fund listed several policy recommendations for the Biden administration and Congress, including:

“The primary purpose of health insurance is to help people get health care in a timely fashion and protect them from catastrophic costs in the event of serious illness. Insurance fills these needs when coverage is continuous and comprehensive,” the researchers said in the report. “While the ACA helped the U.S. make great strides toward better health coverage, the job is not done.”