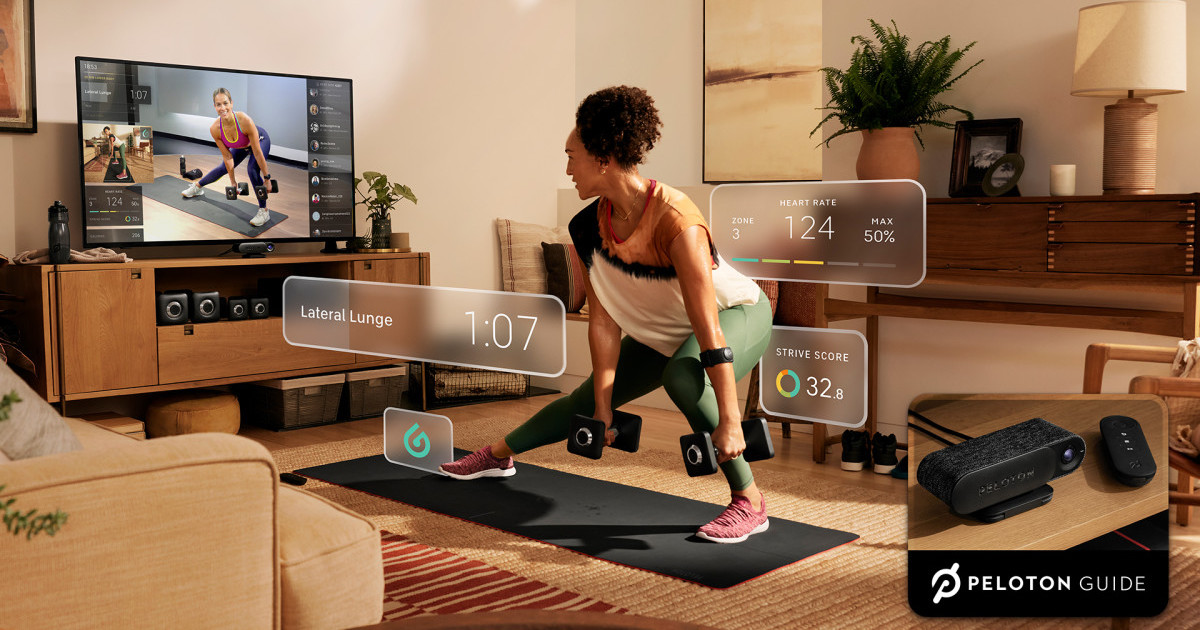 Connected fitness company Peloton is stepping outside treadmills and bikes with its new strength training product, the Peloton Guide.

The Guide is a camera that can be connected to a user’s TV so they can perform directed weight lifting workouts with their own equipment. Peloton said it uses machine learning to track movement, and a self mode allows members to view themselves and compare their form to an instructor’s. The Guide also comes with a body activity mode that gives users insights into which muscle groups they’ve worked out recently.

The device will cost $495, and come with Peloton’s heart-rate-tracking band. Peloton said it will be available in the U.S. and Canada early next year, but customers in the U.K., Australia and Germany will have to wait until later in 2022.

When the COVID-19 pandemic shut down gyms, many Americans were forced to take their workouts back to their homes, a trend that may continue into the future.

Apple meanwhile is doubling down on its fitness offerings, rolling out a slew of new programs for its Fitness+ program designed to be used with its Watch wearable. But at a TechCrunch Disrupt virtual keynote in September, Peloton Chief Content Officer Jennifer Cotter said Apple was missing the “special sauce” Peloton had created with its engaging community.

“[With Apple], there’s no kind of pull with the community to rally to take the classes, be part of it. So I would say that’s a point of differentiation we’re pretty proud of, and you can’t just fake that. You can’t just put a bunch of classes out there and motivate a bunch of people who are not working out currently to do it,” she said.

In April, the U.S. Consumer Product Safety Commission issued a warning about the Peloton Tread+ after it received reports of a number of child injuries and one death. At the time, Peloton said the release was inaccurate and misleading, but in early May the company recalled its connected treadmills.

At the TechCrunch Disrupt event, CEO John Foley said the company has added new safety features to their devices. Its new version of Tread, announced in August, includes a feature that requires users to put in a four-digit passcode before turning the treadmill on as well as a safety key that allows runners to stop a class quickly.

“We realized last year that we now need to be better,” he said. “We need to innovate in safety. We’re excited about it. We are rising to the occasion. We’re not shirking our responsibility to be the industry leader in safety. So that’s kind of what changed, is our mindset of, ‘Oh, we’re innovating on all this other stuff. Let’s also innovate on safety.’”