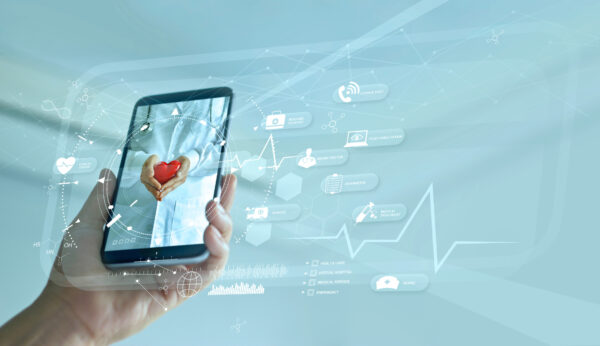 In 2021, just 18 percent of Americans used a mobile app to access healthcare services – a decrease from prior years, despite the fact that such services were increasingly available in response to the pandemic.

That’s bad news for providers: apps make it easier to deliver care to more people more efficiently and can serve as an excellent source of data to direct future care and treatment. The questions healthcare systems should be asking themselves, then, are why adoption is so low and what needs to happen to increase adoption.

Here are three points to consider for any healthcare system that aims to develop apps that enjoy high adoption and, as a result, improve patients’ lives.

Healthcare apps typically have two user groups: patients and physicians. For apps to improve health outcomes at scale, they have to work for both of these groups.

So what does “work” mean? In this context, it means that life with the app has to be noticeably better than life without the app.

To clear it, product teams need a deep understanding of what each user group’s day-to-day life is like, and specifically where there are pain points that an app can relieve.

The best way to get that understanding is to talk to people from both groups. In my work, I found that physicians often wanted to make sure that apps would provide them with accurate data they could easily access and (ideally) that flowed directly into patient EHR files.

Patients, on the other hand, wanted something that fit into their lives and made them feel better. That sounds simple, but there’s actually quite a bit of complexity to the notion of “feeling better.” Before I get into that, though, it’s worth emphasizing that talking to users isn’t rocket science, but it’s absolutely essential to creating an app that drives adoption. What users want may not be what the CEO thinks should be in an app. But user wants and needs must be the driving force.

One strange reality of the medical world is that we talk a lot about physiological conditions and treatments and ignore the emotional realities involved. But emotions play a huge role in health outcomes: fear (of side effects and dependence), for example, is a major reason people don’t take medications as prescribed. And more than half of people want providers who explicitly offer emotional support.

Then there’s the fact that some conditions, like overactive bladder (OAB), come with social stigma. Patients often feel shame around their symptoms or had a tendency to minimize the symptoms and the impact of those symptoms on their life. Some of them are so embarrassed that they don’t even like to talk about the condition with their doctors.

So when building an app for this group, it’s mandatory that it makes these patients feel safe and validated. You are asking them to keep a diary of bladder leaks – not a fun thing to dwell on for most people – so you have to find ways to ensure that documenting leaks made patients feel better (not worse). Without that, people wouldn’t use the app often enough to generate enough data for their physicians to assess progress and make treatment recommendations.

In this case, using straightforward, conversational, gender-inclusive language is important to achieve that goal. I recommend combining written information with helpful icons. Another strategy that has proved effective in the past based on my experience is: when users documented leaks, they received stories and statistics about others who had similar experiences so they would feel less stigma.

Empathy is huge in healthcare apps, especially because people often use these apps when they’re not feeling well to begin with. Even small adjustments to language can have a big impact on the emotional experience of engaging with an app – and on a patient’s likelihood of becoming a repeat user.

When you talk to users and have a bunch of creative folks working on an app, there’s no shortage of ideas of what to build. But a study from 2019 found that 80 percent of features in enterprise cloud software never get used.

That’s an expensive problem that healthcare companies can’t afford to emulate in their apps. To avoid making it, it’s best to start small: launch a minimum viable product (MVP), test it, and expand or refine based on user engagement and feedback.

Easy to say, of course, but how do you determine what that MVP looks like? Again, user input is essential. One tried-and-true strategy is to create low-fidelity mockups and prototypes and ask potential end users to interact with them. Then ask for their feedback: what did they like? What didn’t they like? What did they wish the app did or didn’t do? As you learn more, you can create higher-fidelity versions that get closer and closer to the end product.

With this approach, there’s very little risk involved when you launch the actual app, because you’ve already gotten feedback from people who will be using it.

Once the app is live and has demonstrated real value, you can figure out how to improve users’ lives even more by making changes and additions.

When the iPhone launched in 2007 and apps were a novelty, people were happy to download silly apps that did very little. (Remember the make-your-screen-a-flame app?)

Today, most smartphone users are app fatigued. The last thing we want to do is download yet another app to complete a simple task. That’s the reality healthcare organizations are operating in, and it means the bar for launching an app that drives adoption and improves health outcomes is high.

But by centering users, their needs, and their experiences, it can be done. And it has to be. Apps let providers deliver more personalized care to more people more efficiently. That’s going to be essential to treat an aging population with increasing acuity, especially given the ongoing healthcare provider shortage.