While inflation was clearly at the top of voters’ minds in this year’s midterm elections, the Supreme Court decision overturning Roe v. Wade played a significant role in motivating key voting blocs that likely contributed to the Democratic party’s stronger-than-expected performance, a new analysis of KFF’s supplemental questions on the Associated Press VoteCast survey of midterm voters.

About four in ten (38%) voters overall said that the Supreme Court decision ending the constitutional right to an abortion had a major impact on their decision about whether to vote in this year’s election. The share citing the decision as a major motivator was highest among Black women under age 50 (61%), Hispanic women under age 50 (58%), those who voted for Democratic Congressional candidates (56%), first-time voters (54%), voters under age 30 (53%), and those who said they were angry about the Supreme Court’s abortion decision (55%).

While the election results reflect voters’ views about individual candidates and other factors, in terms of issues, the analysis suggest that abortion worked as a counterweight to voters’ broader concerns about inflation, which favored Republican candidates.

Nationally, nearly half (47%) of all voters say the Court’s decision had a major impact on which candidates they supported in this election, including almost two-thirds (64%) of those who voted for Democratic House candidates. 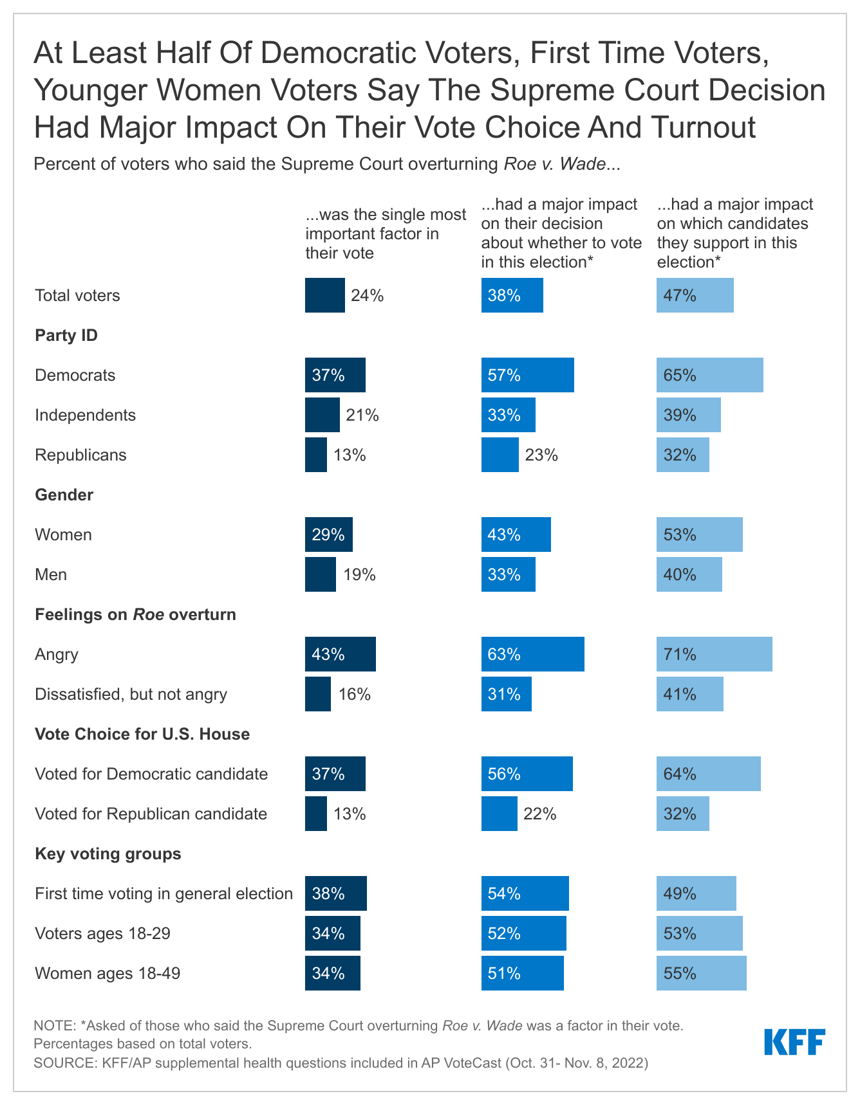 The analysis shows similar patterns playing out in states with competitive Senate races and where voters faced abortion-related ballot initiatives.

In addition, the analysis suggests that abortion contributed to some Republicans voting for Democratic Senate candidates in key states. While relatively few Republicans identified the abortion decision as the single most important factor in their vote (about one in ten Republican voters), about a fifth of those that did in both Pennsylvania (21%) and Arizona (19%) voted for the Democratic Senate candidate. Though small as a share of total voters, these kinds of crossover votes may have mattered in these close races.

In those two states, as well as Georgia, Nevada and Wisconsin, which had competitive Senate and gubernatorial races, at least four in ten voters overall said the decision had a major impact on who they voted for.

In addition, in each of the four states with abortion-related ballot initiatives (California, Michigan, Kentucky and Vermont), about four in ten voters said the Supreme Court’s abortion decision played a major role in their decision to turn out to vote. 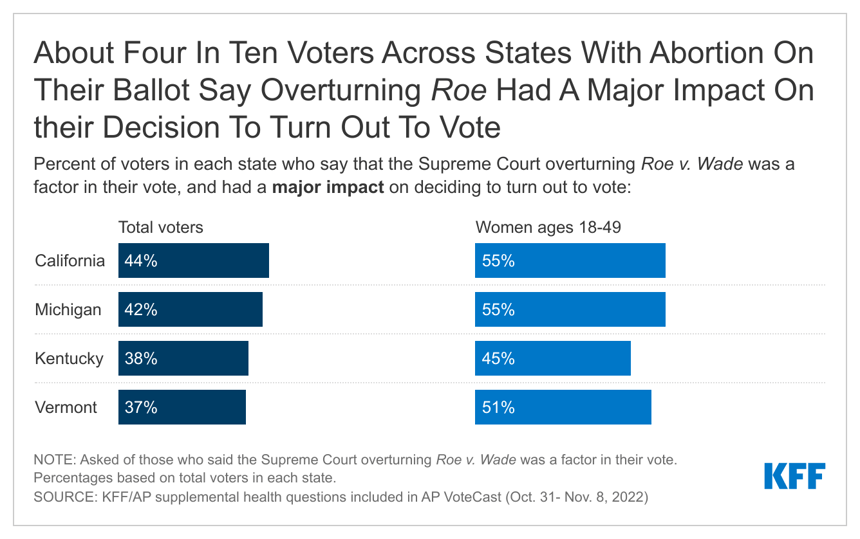 The analysis draws on supplemental questions to the AP VoteCast survey that KFF added to provide a deeper look at the role of abortion in motivating both turnout and vote choice. The AP VoteCast is a national survey and 48 state surveys of 2022 midterm voters conducted by NORC at the University of Chicago for the AP and FoxNews beginning on Oct. 31 and concluding as polls close on Nov. 8, 2022, in English and Spanish.