Even before Covid-19 disrupted the traditional model for clinical trials, researchers were harnessing the power of technology to make trials more accessible and improve data collection.

The movement had coalesced under the banner of decentralized clinical trials, or DCTs, which leverage technology and other non-traditional approaches to monitor patients and gather data without limits on geography. Another envisioned benefit included the ability to recruit a broader patient population.

The pandemic accelerated the adoption of DCTs, but it also forced researchers back to the drawing board as they brushed up against the limits of the DCT model. What has become increasingly clear is the need for a hybrid approach that considers the perspectives of patients and the impact to clinical trial sites. 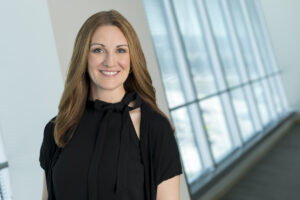 “Wherever possible, we should give patients the choice to participate in a clinical trial in a way that is most meaningful for them,” said Marie Rosenfeld, senior vice president and head of clinical science at Astellas Pharma.

“Patients and researchers had little choice but to rely on technology and otherwise non-traditional trial execution practices in the early days of Covid-19, as the virus limited face-to-face access to health care providers,” Rosenfeld said. “We all took rather dramatic approaches to sustain the trials we had underway.”

Sponsors learned a great deal about the pros and cons of the approach, both for patients and for trial sites.

“Access and interest in technology proved to be among the chief limits for DCTs. Some patients struggled with consistent access to Wi-Fi, while others continued to prefer in-person visits,” Rosenfeld said. She cited an example of a women’s health study during the pandemic, in which patients felt that going to a doctor’s office was safer than allowing health workers into their homes.

Trial sites, meanwhile, ended up fielding a flood of tech-related questions, turning them into de facto IT support centers and creating issues around reimbursement.

In short, DCTs were not as free from friction as imagined. “It is highly unlikely that the traditional concept of a DCT will be implemented as it was originally envisioned,” Rosenfeld noted.

Evolving towards a hybrid approach

DCTs have a place, particularly for long-term follow-up and large outcomes studies. But a hybrid approach – one that incorporates digital elements – might be a better fit.

“At Astellas, we are evolving our clinical trial approach to fully leverage the value that technology can bring in delivering the patient-guided clinical trials of the future,” Rosenfeld said. “We can increase the quality and quantity of data collected and improve the patient experience, all while enabling faster decision-making and speeding up the drug development process.”

In an oncology trial, for example, researchers could combine a device/wearable with other non-biometric data collected from a patient via an app. Used in combination, the technologies could allow patients, even in early oncology trials, to spend less time in a doctor’s office and more time with their families at home, while having infrastructure in place to monitor and ensure their safety. The data, meanwhile, could alert a treating physician of potential medical issues, provide researchers more robust information on potential side effects of the product being studied and allow patients to feel safe in an environment friendlier than a hospital.

In other trials, remote data collection might allow patients to leave the hospital earlier than they would otherwise.

Providing the best of both worlds for patients

If researchers want to succeed with a hybrid model, they must be able to translate technology into strong clinical execution. For Astellas, that may entail leveraging a mix of external technology solutions with some existing or under development by the company.

“We have an opportunity to build on our expertise in traditional pharmaceutical development by leveraging pioneering technology in health and applying it to clinical trials in a way that is meaningful to patients,” Rosenfeld said.

Rosenfeld expects it will take three to five years for fully realized hybrid clinical trial models to emerge as the norm. The key to acceptance will be the ability to showcase how hybrid trials are yielding useful data and leading to regulatory approvals.

“We believe a hybrid approach provides the ’best of both worlds’ to both patients and clinical trial sites,” she said. “We look forward to being a part of shaping how all of this will evolve.”