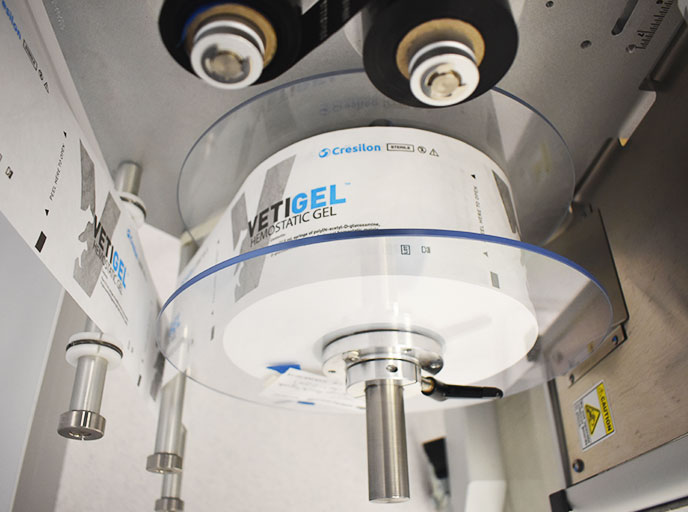 The last time a college student founded a healthcare startup promising to do something revolutionary with blood, it ended up being quite messy. Hopefully things go better for Cresilon.

The Brooklyn-based startup, which manufactures a gel to quickly stop bleeding, raised $25 million in a Series A-4 financing round last week. The round, led by Paulson Investment Company, brings Cresilon’s total funding to date to nearly $82 million, according to CEO and Founder Joe Landolina.

“We believe this latest round will bring us to self-sustaining profitability and any future raises will be for company growth,” he said in a recent interview.

Landolina’s company has come a long way since it was founded in 2010. But really, the curiosity that inspired the startup has been at work for decades. Growing up, Landolina would frequently work alongside his grandfather, a retired chemist who owned a vineyard in upstate New York.

“I would work alongside him in his winery laboratory every single day after school from a very young age,” Landolina said. “I developed a strong love for chemistry, especially plant-based chemistries from ingredients found in nature around me.”

Once he was in high school, he enrolled in university summer programs that focused on tissue engineering research, piquing his interest in the application of plant-based materials for wound healing and tissue engineering. Landolina brought that interest back to the winery lab, and began playing around with polymers.

At the age of 17, he extracted polymers from algae cell walls and discovered a matrix that would instantly bond to living tissue. Landolina had the idea to apply this concept to a traumatic bleeding wound — he wanted to create a way to inject this gel into an actively bleeding wound to create a temporary seal. He entered his idea into a business plan competition as a freshman at New York University in 2010, and Cresilon was born.

Now, Cresilon has grown to become the only aseptic biomanufacturer in New York City, according to Landolina. The startup has a team of 55 employees operating out of a 1930’s schoolhouse turned research lab and 25,000-square-foot manufacturing facility.

The company manufactures Vetigel, a gel that can stop traumatic bleeding in seconds without applying manual pressure. The plant-based gel is composed of two polysaccharides that are derived from algae and are safe for internal and external use. It forms an instant mechanical barrier over the source of bleeding — the gel can stop anything from a small cut to traumatic arterial bleeding, Landolina said.

He pointed out that once bleeding has stopped, the gel allows the patient to create their own fibrin clot. The gel can be removed without disturbing the underlying clot, or it can be left in the body to resorb.

The gel has been used by veterinarians across the U.S. and U.K. to stop animal bleeding, and Cresilon’s fourth round of Series A financial will support the gel’s entry into the human health market. The company submitted the gel’s 510(k) application for human use to the Food and Drug Administration last November.

“As Cresilon grows, we envision that this technology will be able to be used in any place where there is bleeding, from surgeries and trauma to first aid and consumer use,” Landolina said. “Our mission is to save lives, which we are already accomplishing through Vetigel and its application by licensed veterinarians for pets and wounded animals. When we bring Cresilon Hemostatic Gel to the market, we will see our mission unfolding and being accomplished in humans.”

There is a critical need for a broad indication hemostatic device that works quickly across multiple types of bleeds, according to Landolina.

There are many products being sold to stop bleeding — such as Pfizer’s Gelfoam for animal health, Teleflex’s Combat Gauze for trauma and Baxter’s FloSeal for surgery. But they all need several minutes of manual pressure to work, require special storage conditions, are difficult to apply, and/or are ill-suited to work across all types of bleeding, Landolina pointed out. He said Cresilon’s gel stands out because it offers a fast and effective way to control bleeding both at the point of care and in the operating room across all types of bleeds — all without pressure or special storage conditions.

Cresilon’s potential in the human health market has sparked interested from the U.S. Department of Defense. In September, the company striked a cooperative research and development agreement with the Walter Reed Army Institute of Research to improve the treatment of traumatic brain injuries. The data resulting from the research “could form the foundation of future commercial opportunities,” Landolina said.